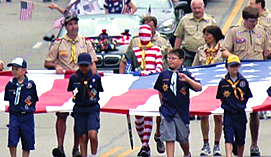 The Centerville-Washington Township Americana Festival started in 1972 as a sidewalk sale promoted by the city’s downtown merchants.  This year, more than 75,000 people will attend the festival and more than 100 volunteers will be working behind the scenes to make it all happen. In 2011 the Festival was the winner of the Best of Dayton Award for 4th of July events.  Read more about the Americana Festival.

There are TONS of events and family activities!

Parade
The highlight of the Americana Festival is the parade. The Parade begins at 10:00am on East Franklin Street, west of Centerville High School, and proceeds West to Cline Elementary on Virginia Avenue.

Street Fair
July 4th at 9:30AM. A Wide Variety of Activities for Young and Old Alike! Each year, the Street Fair continues to grow.  Featuring 300 craft and food booths, artists, musical entertainment and a children’s game and activity area.